Pope: Destroying the Earth is a Sin 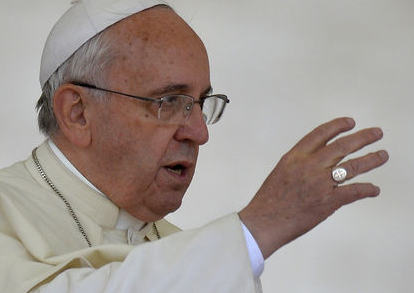 Pope Francis made the biblical case for mitigating the effects of climate change, speaking to a massive crowd in Rome.

In his brief speech, Francis issued a dire warning about the effects of climate change.

“Safeguard Creation,” he said, according to Think Progress, “because if we destroy Creation, Creation will destroy us! Never forget this!”

“Creation is not a property, which we can rule over at will; or, even less, is the property of only a few: Creation is a gift, it is a wonderful gift that God has given us, so that we care for it and we use it for the benefit of all, always with great respect and gratitude,” Francis said.

In the address, the Pope said destroying the Earth is a sin.

“But when we exploit Creation we destroy the sign of God’s love for us, in destroying Creation we are saying to God: ‘I don’t like it! This is not good!’ ‘So what do you like?’ ‘I like myself!’ – Here, this is sin! Do you see?”

The remarks come at the end of a six-day conference on climate change and sustainability at the Vatican, where scientists, economists, philosophers, and legal scholars met to discuss what the Church could do to address the issues caused by climate change. The Catholic Church has a long history of activism on behalf of the environment and Francis appears to be upping those efforts.

The remarks are the latest in a stream of liberal statements by Francis, who famously said “who am I to judge?” about a gay priest and recently argued for wealth redistribution.